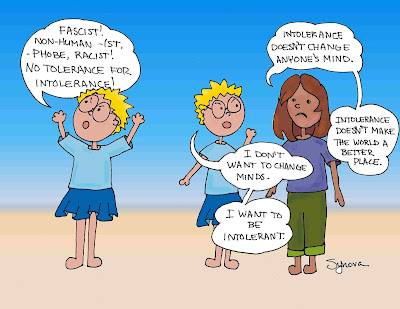 Somehow I never got this colored and posted.  Anyhow, everyone should be honest about what their goals are and what they have as intended results.

When I added Popper's Paradox to the "labels" on this, I did a quick check that I had his name right and saw the fast and dirty definition on wikipedia, that unfettered tolerance simply means that the intolerant will always win.  This is baloney, of course, because we can *contend* without being intolerant.  We can still advocate for tolerance among everyone.  But even so, it struck me just how Popper's Paradox plays into the Progressive/SJW ethos.

Not even fascism is wrong.

The Progressive/SJW ethos is that none of these things are wrong, they only become wrong based on who is targeted by those things.

Because they are GOOD, and you are BAD.

And all that Popper's Paradox means is that the most intolerant side wins, so be intolerant as hard and as loudly as you can.

January 11, 2021
Because allowing people to say scary things in public (or mean things, or false things) doesn't inflame anyone.  It attracts people who are already inflamed. There used to be a joke that went more or less something like this:  There's a couple thousand white supremacist militia members in the US and two thirds of them are undercover FBI agents. And that's the second reason.  Because we actually want the scary conversations to happen in public. Driving those conversations underground doesn't make them go away. Inflamed people are still inflamed except now they are also legitimately aggrieved.  We have thousands of years of History that proves that this is true. Short of simply killing everyone of a certain mindset, ideology, religion, or culture, it's impossible to make them go away by forcing them to keep their scary ideas quiet.  Killing a few simply creates martyrs, not converts. Economic oppression, which was used against the Jews as well as endless other minorit
4 comments
Read more