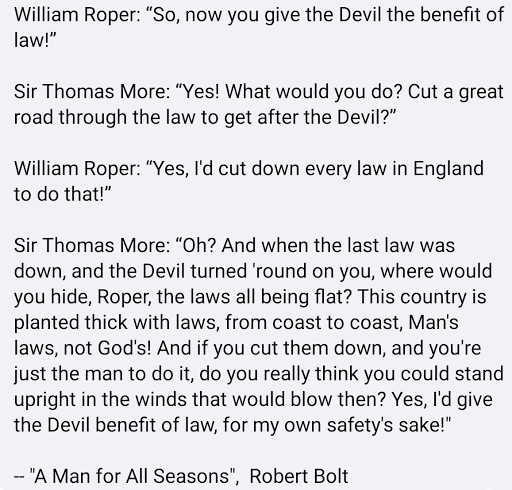 Too many people believe that history has a Direction and as long as they're on the right side of it that what they propose will never turn around and come back on them, it can't. It can't come back at them because they are the good guys. And governing by whim and moral outrage is all about the bad guys.

In the passage with Moore they're really not talking about the devil, they're talking about worldly human opponents. And the argument is that they are bad. No one actually thought that they were going to take Satan into a court of law and do something about it. It was just a way of saying, but what if we are talking about truly bad ideas and truly bad politics?

And I'd say that absolutely every dictatorship and totalitarian horror began as a call for righteousness and the need to protect the people from a dire threat.

What that threat was changes from place to place and time to time. But it always comes down to needing the power to do something about those bad people.

And for that people are saying in public out loud, that we should lay our laws flat, because certainly our laws are not intended to protect annoying people.

June 05, 2020
It seems to me that the "conversation" about Black Lives that is focused on intersectionality is focused on doctrine to the exclusion of life itself; the exclusion of physical, actionable life itself. Rather than focus on how people live or even what they think and feel, the focus is on confession, language, and conversion to a doctrine.            Someone asked if what was going on was a religion.            Not only is it a religion but it can't even really be discussed without using religious  terms.            There's a Church, now, more concerned with exclusivity than with reform. More concerned with an Inquisition than with reform. It's not that some people are going to do it all wrong, are going to address Black Lives wrong, but that anyone outside of the Fellowship can not be ALLOWED to address problems which nearly everyone, to a person, agrees upon.            Not because their ideas are bad.            Not because they don't h
6 comments
Read more