Take the case of "fascism".

When you can see clear as day that the person who is accusing you of fascism is a fascist, they aren't projecting. They're talking about something ELSE.

The Socialist Nationalism, State control of "private" business, the "incentives" and punishments levied by the State to make you think or live in the way you're supposed to live don't actually have a NAME at all. It's just the way things are and the way they are supposed to be. There's no interrogation of premises or even understanding that there ARE premises.

And that's where we are.

If you claim to be against this system of unnamed control you're just lying. And also a fascist. 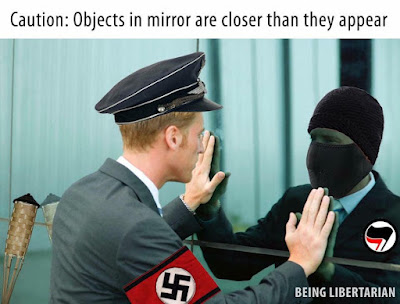 February 13, 2022
The saying goes like this, It's not what you *don't* know that is going to trip you up, it's what you know that isn't so. I believe that the first lady might possibly have been feigning helplessness, just a little bit.  She already had concept art and visuals, so I think she'll be okay.   But someone might truly be so new that they know nothing about science fiction as a genre or how it works in the world.  That person, the truly "new" person, might not realize that the second lady, no matter how assured she seems to be that she's passing on vital Wisdom, is wrong. So lets unwrap her backpack a little (to steal a metaphor). Stories about space pirates are Space Opera, generally.  "Soft" science in science fiction usually refers to sociology or psychology, social "science".  A story about space pirates might be "soft".  But that's picking nits.  The first big boo-boo is this: "not as popular *because* it is women
1 comment
Read more