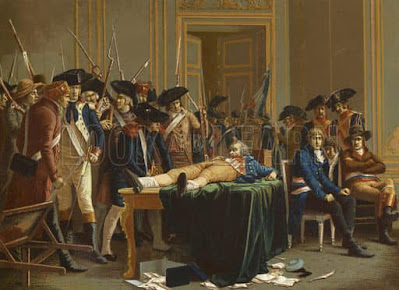 Thinking about this:
(Note after unpacking thoughts: “TL/DR seems inadequate here. Start your own blog, guy.”)
The Western liberal tradition, with its principles of tolerance and freedom of thought and conscience, is almost four centuries old.
It first developed as, basically, “Thirty Years War insurance.”*
The West didn’t invent tolerance (something new and revolutionary in human history, whose rule ever since we were roaming the prehistoric plains had been “whatever you do, don’t talk back to the alpha male/headman/king” or he’ll get mad and smack you with a club”) because a bunch of unusually decent and smart people sat down and decided to reinvent the world. It happened because the particular social, cultural, geographical (Jared Diamond isn’t *all* wrong) and technological circumstances of seventeenth-century Europe has gotten people recognizing that continuing with the old model posed a real risk of actual, not rhetorical civilizational suicide.
After 1618-1648, European thinkers didn’t have to do any more complicated thinking than arithmetic: “If we do that just two more times, mathematically, we’ll all be dead.”
So - starting out slowly, and then progressing steadily over the following centuries - we developed an ideology proposing that where a man prays or how he thinks “neither picks our pocket or breaks our leg.” “Let [Truth] and Falsehood grapple; whoever knew Truth put to the worse, in a fair and open encounter?”, to use John Milton’s classic formulation. We adopted the creed that the best answer to bad thinking was exposure to good thinking.
We no longer had to try and resolve controversies about transubstantiation, predestination, and the designated hitter rule (heresy!) with pike and shot.
So people who remain committed to the Western liberal tradition - and aren’t taking an adolescent civilizationally Oedipal dump on it as a hypocritical bag of “the master’s tools” serving mainly to prop up “the master’s house” — whether they’re consciously aware of their mental framework’s full background, they benefit from all the hard-learned lessons that tradition has incorporated.
Woke supremacism doesn’t have that.
It’s both a new idea — at least in its present incarnation, which (by its own advocates’ admission) rejects “equality theory, legal reasoning, Enlightenment rationalism, and neutral principles of constitutional law” — and an ancient one: “Our people are threatened. Therefore, we may resist our enemies by any means necessary.”
New or old, I don’t think Woke’s acolytes ever learned (my outstanding high school history teachers couldn’t be everywhere) or remember, why tolerance was invented in the first place.
They’ve never internalized the hard lessons that taught us why “Error has no rights” is such a dangerous, deadly doctrine. Or why “good” people might want to be careful imposing their “goodness” on those who understand the Good differently.
Liberal tolerance is not a moral luxury, meant to make us feel good about ourselves or display our decency like peacock feathers. It’s Thirty Years War insurance. It’s what keeps the cannons and war hammers from coming out.
They don’t get this. And so they have no limiting principle to what they are willing to do to their enemies. Their fundamental premises (i.e., that disparate outcomes between different ethnic groups can only result from invidious discrimination) are so patently false that they present the danger that false creeds always do:
“If what we all know to lie at the end of the Inevitable Arc of History isn’t coming to pass, it can only because we aren’t striving hard enough towards it, and being ruthless enough in crushing our enemies. We shall redouble our efforts!”
Human nature being what it is, cultists almost always double down rather than reconsider their cherished beliefs.
But neither does our human nature like to have to consider the possibility that we’re becoming moral monsters. So it’s natural, again, that we deny and minimize what we’re doing.
And that guarantees we’re even less likely to ask “are we the baddies?” and stop our march to the abyss.
That’s Woke’s great danger - and also its great weakness. Because it always needs an enemy, and (just like criminals tend to victimize not the wealthy across town, but their immediate neighbors), the most convenient targets of the Woke — acolytes of a cult that germinated in hothouse environments like academia and journalism — are people within those environments who are marginally less radical. This is how Bret Weinstein got the chop, and Bari Weiss, and any number of other people who thought they were safely progressive.
Inevitably, this kind of revolution ultimately ends with Robespierre getting his own head lopped off in the reign of terror he inaugurated. (See image.)
So one way or the other, Woke is not going to endure. It *will* destroy itself in the long run. The only touchy part will be to ensure that what follows isn’t Napoleon — that the backlash to Woke illiberalism isn’t an equal and opposite illiberalism.
And that’s where conservatives need to make sure they know what they’re to be conserving, and not focus too much on just “owning the libs.”
*”Liberalism is a technology for preventing civil war. It was forged in the fires of Hell – the horrors of the endless seventeenth century religious wars. For a hundred years, Europe tore itself apart in some of the most brutal ways imaginable – until finally, from the burning wreckage, we drew forth this amazing piece of alien machinery. A machine that, when tuned just right, let people live together peacefully without doing the ‘kill people for being Protestant’ thing.” — Scott Alexander

February 19, 2021
Somehow I never got this colored and posted.  Anyhow, everyone should be honest about what their goals are and what they have as intended results.   ADDENDUM: When I added Popper's Paradox to the "labels" on this, I did a quick check that I had his name right and saw the fast and dirty definition on wikipedia, that unfettered tolerance simply means that the intolerant will always win.  This is baloney, of course, because we can *contend* without being intolerant.  We can still advocate for tolerance among everyone.  But even so, it struck me just how Popper's Paradox plays into the Progressive/SJW ethos. Intolerance isn't wrong. Racism isn't wrong. "Punching" isn't wrong. Political violence isn't wrong. Hate isn't wrong. Not even fascism is wrong. The Progressive/SJW ethos is that none of these things are wrong, they only become wrong based on who is targeted by those things. Those who like to quote Popper believe intolerance a moral ne
2 comments
Read more

June 05, 2020
It seems to me that the "conversation" about Black Lives that is focused on intersectionality is focused on doctrine to the exclusion of life itself; the exclusion of physical, actionable life itself. Rather than focus on how people live or even what they think and feel, the focus is on confession, language, and conversion to a doctrine.            Someone asked if what was going on was a religion.            Not only is it a religion but it can't even really be discussed without using religious  terms.            There's a Church, now, more concerned with exclusivity than with reform. More concerned with an Inquisition than with reform. It's not that some people are going to do it all wrong, are going to address Black Lives wrong, but that anyone outside of the Fellowship can not be ALLOWED to address problems which nearly everyone, to a person, agrees upon.            Not because their ideas are bad.            Not because they don't h
7 comments
Read more