Welcome the Ministry of Truth 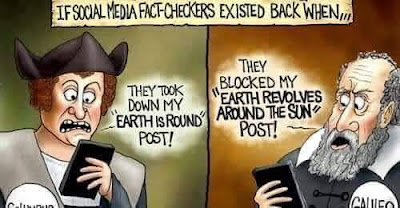 I had something to say about what happens if we lose our doubt, our suspicion, and our ability to look for a lie because we have been conditioned to expect that everything around us has been certified safe?

And then I clicked through to the article.  I'll link it here and I won't quote the whole thing, just representatives of the points made.  You can go read it all if you still maintain a skeptical nature.

"Publishers of nonfiction should have built-in, on top of the author’s fact-checking, a review process by people trained in fact-checking."

The author begins with an example of a book suggesting that sunning your...butt hole every day was healthy.  I agree that this is utterly absurd.  I disagree that we need a ministry of truth to ensure that no one publishes such a silly health suggestion.  What we need is a developed and maintained skepticism, not an assurance that if something is in a "non-fiction" book that it must be true.

This is a matter of maintaining a healthy and strong immune system when it comes to how we perceive the world.  Our text books are often wrong.  Experts are often wrong.  Lawyers or doctors or teachers or priests are often wrong.  No human is without error and a healthy society has to promote healthy doubt. Promoting gullibility is the opposite of what we should do. People who seek the comfort of authority might not want us to have stunted and ineffective immunity toward bull shit, but that's the result of it.

This is difficult to find a pull quote because the author essentially opposes the idea that a publisher should publish opposing ideas (quotes in the original because the author is making up a fake quote, I added the "not" to faithfully communicate the author's opinion):

“if we publish these voices we must [NOT] publish the counter voices.”

The example is publishing a xenophobe because the publishing house published the memoir of an immigrant.  Pretty much, this example never happened.  And the idea of "balance" being required to publish opposing viewpoints has never existed outside of old-fashioned journalism.  The idea that publishers should publish a variety of books, memoirs, opinions and what-not, however, is an ordinary idea.  But recall that this author wants someone to curate what people are allowed to read.

The author titles this section "People's Humanity is not Debatable".  Unless, of course, your humanity happens to have a different opinion than the author.

A very silly complaint about sticking award "stickers" on the front cover art of books.  Lets move on.

"There is absolutely no reason to choose moral judgement language to imply that one thing is “clean” and the rest is thus dirty, impure, and immoral."

The author doesn't like "clean" and "wholesome" as descriptors for books without swearing or sex in them.  Someone who wants our books fact checked and our publications curated to avoid bad ideas, is extremely sensitive to the idea that liking books that are not "clean" or "wholesome" means that the author is a bad person.

"This should be self explanatory. So much so that it shouldn’t even exist, yet here I am trying to understand why I have had to stop listening to so many audiobooks for making this choice."

Personally, I'd encourage anyone who narrates books or does voice acting who considers themselves a Person of Color to seek narration jobs for books written by white authors with white main characters or diverse casts.  Try for jobs to voice characters of color different from your own. Because why the hell not?  If you're good at your job you deserve your job.

I can guaran-damn-tee you that I would never complain that I "had to stop" listening to an audiobook because I discovered that the guy voicing the Irish cop was a second generation Korean-American.

At first I thought it was to stop making copies of the latest "hot" thing, but it's actually complaint that  people compare their book to a current "hot" thing that has a twist, so they're giving away the ending.   Don't do that.

So, to wrap up, all in all.  Someone who thinks that publishing should be curated and safe, doesn't want to be reminded that some books aren't "wholesome" and "has to stop" listening to audiobooks if it turns out that the narrator is narrating characters that don't match the narrator.

Mauser said…
I wanna see legal action brought by people who were censored by Twitter and Facebook for "Misinformation" once the facts are truly out.
6:54 PM

On a Wing and a Whim said…
Point the first: why would I expect publishers to be the experts on everything? After all, if experts in a field are publishing books, to say they've been "fact-checked" by the publisher is to de facto claim that some editor somewhere who probably has a liberal arts degree knows more about the effect of fasting on kidneys and livers than a nephrologist like Dr. Jason Fung. Or more about Economics than Milton Friedman. Or more about political corruption than Hillary Clinton...

Point the second: Doesn't even make sense. The incoherent argument offered up "publishing a book by a xenophobe attacking immigrants" vs. "an immigrant published a memoir." Well, first, holy loaded language Batman! We can tell the author's opinion from ten thousand paces, just by connotation along.

But then saying "people's humanity is not up for debate" - what is that even supposed to mean? Is she asserting that debating someone's opinion is therefore debating their humanity? Wouldn't that imply that she thinks our congruence of opinions with hers is what makes us human, and if she doesn't agree with our opinions, we're inhuman?

As for point 4, "clean" and "wholesome"... I'm afraid she hasn't taken the time to think through the ratings on romance books versus movies. Parents use movie ratings for deciding if they're going to let their kid watch a movie. Romance books... are not books for kids. They aren't intended to be books for anyone under puberty. Therefore, the MPAA rating system is worse than useless for the target audience.

And the statement that she feels morally judged for reading things that, let's face it, are often dirty, impure, and immoral? Tells me she has a problem with fact-checking when the facts are against her.

And point 5... The author is so racist that she feels that the race (According to her current culture's designation) of the narrator is the most important thing about the audiobook, and she must judge people she's never going to meet, whose skin colour she can't see, based not on their performance but upon what she expects their skin colour to be.

And then complains if the narrator gives a character an accent, for surely if she didn't see the author noting the character's accent in the text, then the audiobook narrator is not allowed to interpret the characters as having an accent. All characters, regardless of background, must sound like her unless the author explicitly stated otherwise.

Point Six... Oh, honey, if genre tags was all it took to find the audience, then genre tags would be all the publishers used. You're farting against thunder, there. Also, what makes you think that always gives away the ending? You'd be amazed how often it doesn't... but you'd have to read the book to find that out.

February 14, 2021
We're told, these last few days, that a person should lose their job for making a comparison between current events and the Holocaust. That doing so is anti-Semitic.  That it's hateful. Multitudes of people have pointed to what Ben Shapiro calls "overwrought holocaust memes" that were posted by multitudes of people on the left political spectrum without any consequences all all.  Worst, they might be told that it makes light of the horror of the holocaust.  But that's the worst of it.  You don't lose your job or get accused of hate or racism. So lately when Gina Carano shared a post about how regular folks, even children, were encouraged to go after Jews, to hate, harass and beat them, and that without encouraging and accepting this the conditions where soldiers could come around and round up people would have never happened, it's suddenly oh so far beyond acceptable. Why? Because she was perceived to have been pointing out the acceptance and encourageme
2 comments
Read more