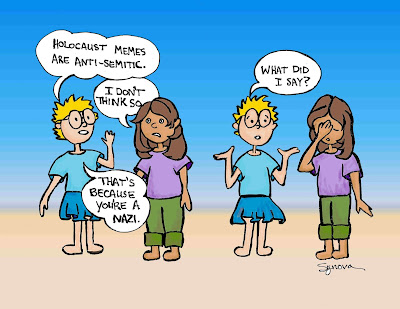 We're told, these last few days, that a person should lose their job for making a comparison between current events and the Holocaust. That doing so is anti-Semitic.  That it's hateful.

Multitudes of people have pointed to what Ben Shapiro calls "overwrought holocaust memes" that were posted by multitudes of people on the left political spectrum without any consequences all all.  Worst, they might be told that it makes light of the horror of the holocaust.  But that's the worst of it.  You don't lose your job or get accused of hate or racism.

So lately when Gina Carano shared a post about how regular folks, even children, were encouraged to go after Jews, to hate, harass and beat them, and that without encouraging and accepting this the conditions where soldiers could come around and round up people would have never happened, it's suddenly oh so far beyond acceptable.

Because she was perceived to have been pointing out the acceptance and encouragement, even moral mandate, for people on the left to turn on and despise their neighbors.  She implied that the LEFT were the Nazis.

And that, my friend, is enough to get you fired.

Linda Fox said…
I happen to agree with Gina - the Left DOES act like Little Fascists.

Go ahead and come after me - I blog at www.libertystorch.info

And they really do act like fascists. But they don't IDENTIFY as fascists, so it doesn't count. Or something. :/
12:12 PM

January 11, 2021
Because allowing people to say scary things in public (or mean things, or false things) doesn't inflame anyone.  It attracts people who are already inflamed. There used to be a joke that went more or less something like this:  There's a couple thousand white supremacist militia members in the US and two thirds of them are undercover FBI agents. And that's the second reason.  Because we actually want the scary conversations to happen in public. Driving those conversations underground doesn't make them go away. Inflamed people are still inflamed except now they are also legitimately aggrieved.  We have thousands of years of History that proves that this is true. Short of simply killing everyone of a certain mindset, ideology, religion, or culture, it's impossible to make them go away by forcing them to keep their scary ideas quiet.  Killing a few simply creates martyrs, not converts. Economic oppression, which was used against the Jews as well as endless other minorit
4 comments
Read more