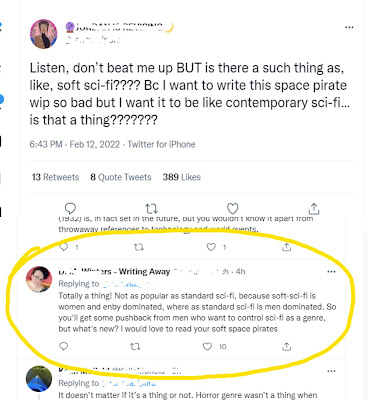 The saying goes like this, It's not what you *don't* know that is going to trip you up, it's what you know that isn't so.

I believe that the first lady might possibly have been feigning helplessness, just a little bit.  She already had concept art and visuals, so I think she'll be okay.

But someone might truly be so new that they know nothing about science fiction as a genre or how it works in the world.  That person, the truly "new" person, might not realize that the second lady, no matter how assured she seems to be that she's passing on vital Wisdom, is wrong.

So lets unwrap her backpack a little (to steal a metaphor).

Stories about space pirates are Space Opera, generally.  "Soft" science in science fiction usually refers to sociology or psychology, social "science".  A story about space pirates might be "soft".  But that's picking nits.  The first big boo-boo is this: "not as popular *because* it is women and enby (???) dominated."   NO!  No, no, no, no, no.  Firstly, Space Opera is not less popular than "hard" science fiction.  And being woman dominated describes the whole of the traditional parts of the science fiction genre today, and rife with "representation" in the past.

The Grand Masters of science fiction, hard, soft, in-between, and of Space Opera are Giantesses such as Bujold and Willis and LeGuin and Leigh Breckett and Asaro and Cherryh and Norton and Butler and...

But what is it with the message that only the less popular science fiction sub-genres have women in them?  The message is that someone out there is out to keep you down.  That is a damaging and destructive message.  And to say that *standard* sci-fi is men dominated so you're going to get push-back? No, no you won't!  Not even if the male domination is true.  NORMAL people do not divide into groups like public potties, male and female, and enter into this absurd struggle where men will try to keep you out if you write a Space Pirate Romp.  Or if you're a female physicist and write science fiction with hard edges no one is going to look at you and shriek, "OMG IT'S A VAGINA PERSON".

Oh, wait, I take that back, in traditional publishing the EDITORS might just scream exactly that as they run up and down the hallway telling everyone about their amazing new author they just found.  Because trad-pub is *very* *strange*.

So here's someone, so enthusiastically helpful, explaining that men are out to get you, but after all, what's new?

It's what she knows that isn't so.

Check out this article.  The Women Other Women Don't See.  It's got information on how to find other sources, a couple of published histories of women in science fiction.  If there's someone trying to keep you down, it's those who warn you about opposition that exists only in their own heads.

Anonymous said…
I think "enby" is supposed to be N.B., as in non-binary (instead of "nota bene.") Now, just what non-binary is supposed to mean seems to vary so much by the day that your guess is as good, if not better than, mine.

Kris Rusch's anthology of early women sci-fi writers is a great resource for people interested in the topic, especially the official introduction.

The Principle of Non-Persuasive Argument

August 07, 2021
Have you noticed what I've noticed? It's not really something new.  I started to notice way back in 2015-ish that protests seemed to be deliberately non-persuasive.  Note that this is well before Trump, possibly all the way back to the beginning of Obama's terms or farther.  And I'll admit that I've only noticed this as a left-wing phenomenon, possibly because I don't need to be persuaded of what my opinions already are.  (And right-wing arguments that I find stupid mostly elicit a rolling of my eyes.) I had a long conversation once with someone about the very poorly conceived practice of blocking freeways.  My argument was that anyone stuck on the freeway would be motivated negatively toward whatever the blockage was supposed to be about, and that furthermore, nothing about a freeway even began to indicate what cause the blockers were intending to highlight.  In fact, if I don't say here what the cause was, in future years no one will be able to figure it
2 comments
Read more